York Minster from the Wallsdetails 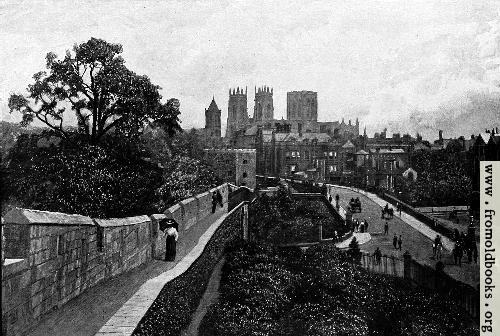 York Minster from the Walls, in York, Yorkshire, England more

York Minster from the Walls

It is almost impossible for a Yorkshireman to write of York in anything but the language of enthusiasm. To him York is what Rome is to the Roman, Paris to the Parisian, Jerusalem to the Jew. London and Winchester may have charms for him if he be a student of history, but York in is opinion is the true capital of England. She was proud and imperial when London was a miserable swamp beside the Thames, and in is eyes she wears a dignity to-day which London will never be able to attain. In many respects York is absolutely unique. You will find almost as much of ancient Rome within her walls as in Rome itself, and there is not a street or alley inside her gates which is not associated with some great name, some historical event, or is destitute of some peculiar interest.

With those who know York well and intimately it is an axiom that no one may ever know her altogether; every fresh visit to her reveals some new charm. Moreover, she has a charm almost peculiar to herself in the fact that of all English cities she more than any other mingles the very old with the very new. She is so old as a city as to be literally redolent of antiquity, and yet in some things she is as modern as Paris herself.” (p. 357)

York Minster is the largest gothic cathedral in northern Europe, and sits in a very prominent position in the centre of the city. An early wooden church was replaced with a stone one starting in the 620s (yes, about 1400 years ago). The church was destroyed when Scandinavians sacked York in 1075, and a new church 365 feet long was built, but it was not until 1220 (less than a thousand years ago) that the present building was started.