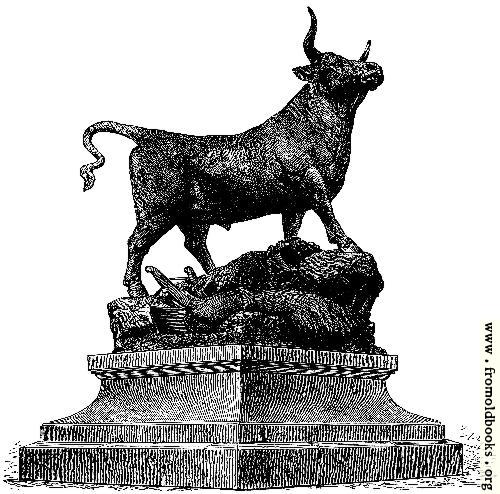 By M. Cain. Grand Basin of the Trocadéro Palace.)

One of the chief features of the paris Exhibition of 1878 was the magnificent waterfall beneath the Trocadéro Palace and the grand basin at the foot of the cascade. At the four angles of this basin were gigantic groups of animals, the bull, the horse, the elephant, and the rhinoceros, typical of the various quarters of the globe, while around it spouted streams of water from an infinity of grotesque heads, or masks.” (p. 256)

“[...] the famous bull which was modelled by M. Cain. It was colossal in size, and was executed in cast-iron, richly gilt. The bases on which the groups were placed were square in plan, and this form was evidently one which gave the sculptors some considerable difficulty in the arrangement of the animals. M. Cain, bu the bold manner in which he disposed the rockwork on which the bull stands, ntirely avoided the awkwardness of the square pedestal. Beneath the animal, thus chosen to typify Europe, we have a plough and some wheatsheaves to remind us of her agricultural pursuits.” (p. 256)