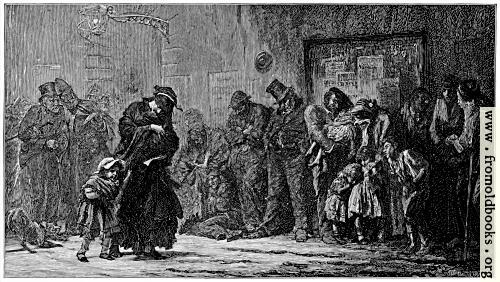 The oil painting on which this engraving was based was exhibted under the title, Applicants for Admission to a Casual Ward, at the Royal Academy in 1874; it was made to illustrate a scene from Dickens:

“‘Dumb, wet, silent horrors! Sphinxes set up against that dead wall, and none likely to be at the pains of solving them until the general overthrow.”

In the picture there are a line of poor people in Victorian clothing, standing against a dimly-lit wall, some clutching a piece of paper. One has two children next to him and another child barefoot in his arms. In the foreground a woman in a long skirt and a hat holds a paper and is accompanied by a child of perhaps five years of age.

When Charles Dickens selected Mr. Luke Fildes to be the illustrator of the never-completed Edwin Drood,” the great novelist was only giving another instance of the marvellous insight he possessed into character. He saw at a glance, doubtless, that in our present subject he would find a genius that jumped precisely with his own. That he was right must be evident to all who have any knowledge of Mr. Fildes’ work. The deep pathos, the dramatic realism, the power of close observation of simple but telling details, the intimate acquaintance with the motives, feelings, and emotions, stirring the heart of every-day common life which it displays, are in the very spirit of Dickens [...] (p. 49)