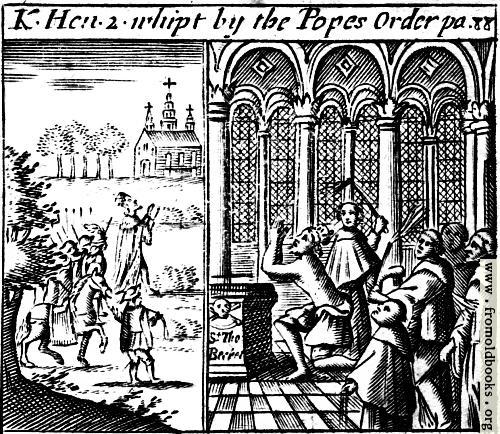 henry the Second our King, was much vexed by this Pope [Alexander III] for the death of Thomas Becket, whom the Pope made St. Thomas for opposing his Sovereign, who being killed by some persons at the Stairs of the Altar, in the Cathedral at Canterbury, the Murder was charged upon the King by the Popes Legate; and though he swore that he was in no way concerned in his death, yet he was forced to kiss the legates knee, and submit to such pennance as he should appoint him; one part whereov was, That he should absolutely submit to the Pope in Spiritual matters. And we read, that when King Henry came out of France, he went to Canterbury; and as soon as he was in sight of the Cathedral, he put of his Shooes [sic] and Stockins, and went bare-foot to Beckets Tomb; the waies being so sharp and stormy, that his feet bled as he passed along; and when he came there every Monk in the Cloister whipt [whipped] the King’s back with a Rod; yet a popish Historian saith of this Becket, That he was worthy of death and damnation for being so obstinate against God’s Minister his King, Upon this Pennance the Pope granted to the King and his Heirs the Title of Kings of England.” (pp 87, 88

“This Pope plagued the World about one and twenty years, and was then suddenly hurried out of it in the midst of his wretched and ambitious contrivances. Symson Hist. Church.” (p. 88)

Henry II reigned from 1154 – 1189. Henry appointed Becket as Archbishop of Canterbury hoping he would help the King reform the Church from some abuses, but in fact Becket became ascetic and refused to help.

When a clerk commited a murder and went unpunished, King Henry promoted a law that clergy should be tried for murder in civil courts, not church courts, restricting movements of high-ranking clergy, and also taking control of revenues of vacant sees (Bishop’s territories). Becket signed this but later asked the Pope to release him from his oath. Becket defied the King and fled to France.

Henry had the Archbishop of York, Roger, crown his eldest son (also called Henry). Becket and the Pope were upset by this, as was King Louis VII of France, who was sheltering Becket. Henry was forced to let Becket return to England, but Becket then excommunicated Roger of York and four other Bishops who had opposed him!

A group of kinghts, apparently misunderstanding some words spoken by Henry in anger and haste, murdered Becket at the alter of Canterbury Cathedral.

It’s also worth mentioning that the Pope had given Henry II permission to conquer Ireland.