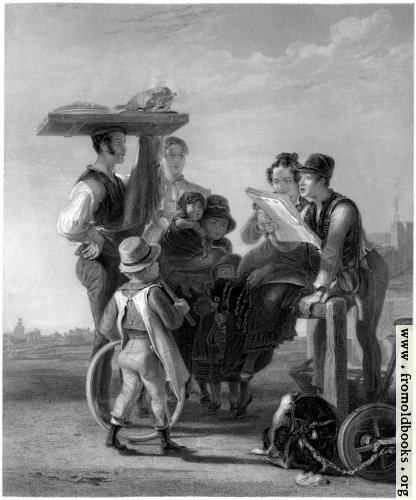 A group of working-class people in Victorian dress stand around a man who is leaning on a wooden railing reading out loud from a newspaper. There’s a woman to the man’s immediate right, smiling, wearing a shawl and dress; to her right another woman, with a hat, and two well-wrapped children one of whom is in her arms. Behind her a pale person, and to the extreme right a man with sideburns and a waistcoat and one hand on his hip balances a board on his head with a fresh roast and a pie steaming away. In the front stands a boy wearing a straw hat and carrying hoop and stick, a traditional children’s game. There is also a wheel, perhaps of a barrow, at front right, and a dog chained to it (we see t hdog’s rear end). The man reading wears a hat and has some sort of leather harness over his waistcoat. In the background a cactory with smoking chimneys suggests the scene is in the industrial North of England.

This small picture painted in 1821, passed into the Vernon Collection from the hands of General Phipps; it was purchased after the death of Wilkie, but before the news of his decease had reached England.

When the painter was in the height of his fame England had long been engaged in hostilities with France; the great events consequent on this protracted warfare, which followed each other with such rapidity towards its close, kept the public mind, even of the humblest classes, in a state of eager excitement, and news from the continent was sought after with the utmost avidity by all of every rank and degree. It was this circumstance, no doubt, that suggested to Wilkie the idea of his well-known picture of “Chelsea Pensioners reading the Gazette of the Battle of Waterloo,” finished in 1822, for the Duke of Wellington. “Reading the News,” a kind of “lateral” to the larger and more important work, being exhibited at the royal Academy in the preceding year, prepared the public for what was to follow.

The knot of news-mongers in our engraving is not, however, composed of the veterans who, for the edification of embryo warriors,

“Shoulder their crutch and show how fields are won;”

but idlers, of whom the major part are neglecting their business to hear, it may be, news of the success of our victorious armies: it is certainly something of marvellous interest, as indicated in their countenances.

We cannot regard this picture as one of Wilkie’s happiest efforts, either in composition or colour; the figures of the baker, and the pair conning over the newspaper are in his best manner; with the others he has not been so successful; they are formal in the drawing, and their attitudes are forced. The work has a strong daylight effect, but it is subdued in tone and shows very little positive colour. (p. 152)

I am not certain that the engraver is William Deane Taylor, based only on the signature W. Taylor, but it seems likely.