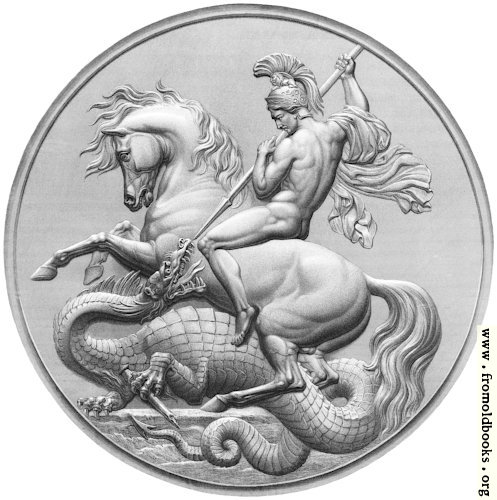 The engraving shows a circular coin (actually a medal), in grey to indicate bas-relief. It depicts Saint George as a naked man with a Roman military helmet. He rides a horse without saddle or reins or even stirrups for his bare feet, and wields a spear; over his left arm is a cloth. Almost at his right knee (he faces left, as does the horse) is the head of the dragon which curves under the horse and holds in one claw a broken-off post or lance. Armed only with the spear, helmet, cloth and moustache, the naked warrior is about to slay the dragon.

From the medal by W. Wyon, R. A. executed for His Royal Highness Prince Albert

Engraved by W. Roffe from a drawing by F. Roffe.

The history of numismatics informs us, that the art of engraving dies for medals, distinct form coins or moneys, is of far more recent origin then either of the other arts to which the term “fine” may be applied. Among the Greeks, medals and medallions were very rare; the earliest information we have concerning them dating no further back than the time when Greece was under the dominion of Imperial Rome. The peculiarities of modern medals, by which is meant those that have been executed during the last five hundred years, is that they often exhibit the portraits of illustrious persons, not of royal or princely houses,—warriors, philosophers, statesmen, poets, &c. Apparently insignificant as these works of art may be, the genius and skill necessary for their perfect production are by no means of a common order; and the study of them by the historian has frequently thrown considerable light upon passages of history otherwise obscure; the information obtained is generally gathered from the inscription, legends, and dates which they supply. An art of so much national and individual importance, and one requiring artistic talent of a high degree, demands some recognition on the part of those who have Art-honours to confer; Mr. Wyon’s place among the members of the Royal Academy, is a position to which he is justly entitled as the first die-engraver of our time. His Royal Highness Prince Albert, with the desire to encourage every branch of Art among us, of which we have had and still have so many proofs, some time back commissioned Mr. Wyon to execute for him a medal of “St. George,”—the titular saint of his adopted country; and the artist’s design of the subject is seen in the engraving which Mr. Wyon, with the Prince’s permission, has kindly permitted us to make. The composition is most spirited, scarcely if at all inferior to some of Flaxman’s, and the drawing of the horse and his rider is most admirable. The former was modelled from the Prince’s favourite horse “Imaun,” at Windsor. The inscription on this side of the medal is Treu und Fest—“Faithful and Firm;” the obverse bears a portrait of the Prince, who sat to Mr. Wyon for the purpose; with the inscription , and the date of the year 1845. The medal is not large, about two inches in diameter, but the workmanship is exquisite. (p. 161)