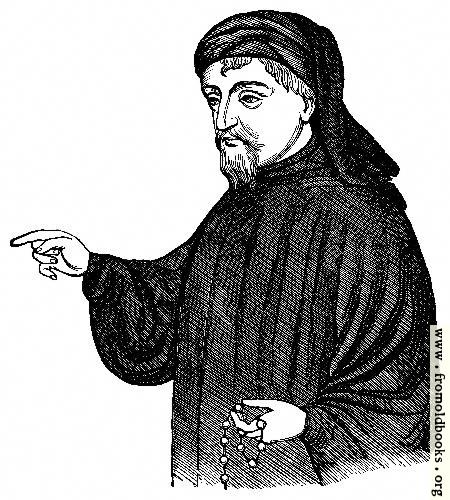 This image is from the chapter “Chaucer and the Mediæval Inn.’ and bears the additional caption “From the Harleian MS. 4866, fol. 91.”

The portrait of Chaucer, which the affection of his disciple, Thomas Hoccleve, caused to be painted in a copy of the latter’s Regement of Princes (now Harleian MS. 4866 in the British Museum), shows him an old man with white hair; he has a fresh complexion, grey eyes, a straight nose, a grey moustache and a small double-pointed beard. His dress and hood are black, and he carries in his hands a string of beads. We may imagine that it was thus that during the last months of his life he used to walk about the precincts of the Abbey. [1911 Enc. Brit.]

The “string of beads” is presumably intended to be a rosary, used by Papists for prayer.