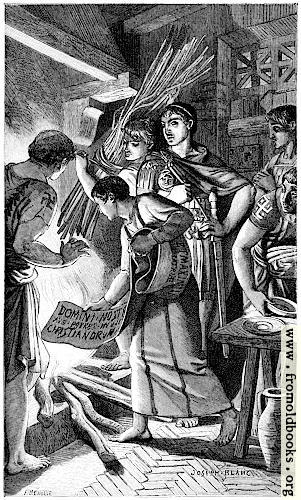 The four men in this picture are engaged in burning a large scroll, a Roman decree banning Christianity. They are clean-shaven and short-haired, wear the Roman toga and have bare feet. One thrusts the scroll into the flames and the other adds a large bundle of sticks.

Note that the swastika on the right-most man’s sleeve long predates any modern connotation of that symbol: this book was published in 1887.

“What is it?” everyone asked curiously.

“Neither more nor less than the famous decree,” Pankration replied with childlike joy, “look:” DOMINI NOSTRI DIOCLETIANUS ET MAXIMIANUS, INVICTI, SENIORES, AUGUSTI, PATRES IMPERATORUM CÆSARUM, and so on. Look at it.”

And he threw it into the flames, and the gigantic son of Diogenes covered it with [bundle of logs] to maintain and stifle the crackling parchment, which twitched, twisted with effort contracted in many ways. It first appeared a letter, word, and then shine the praise of an emperor or a blasphemy against the Christians, until no more remained in a small pile of ash blackish. [Google translate] (p. 221)