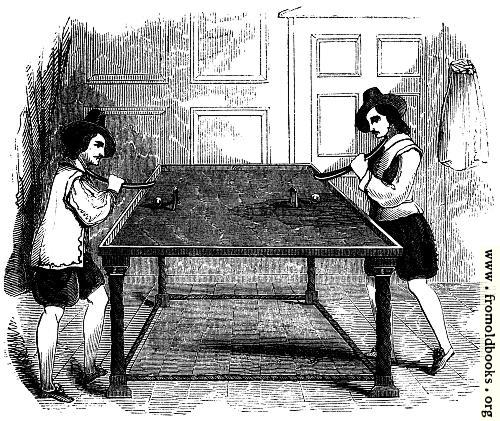 We perceive from the engraving of the Billiards of the seventtenth century (Fig. 2153), that the game was altogether different from what it is now. There were two instead of three balls, and a pair of little arches near the centre of the table, instead of the six “pockets” that are at present to be found attached on its outer edges, namely, one at each of the four corners, and one on each side, at the middle.” (p. 238)

I’d also note that the sticks, or cues, are not at all what one would expect to see today; whether Sir Charles Knight did not notice, or chose not to mention this, or whether billiards cues in the 1840s were as drawn here, is not clear.

The book mentioned in the quoted passage is The School of Recreation by R. Howlett; he also wrote The Angler’s Guide. The first edition was in 1684.

The game of billiards was originally played outdoors on the ground; it is the forerunner of snooker and of the game of pool.