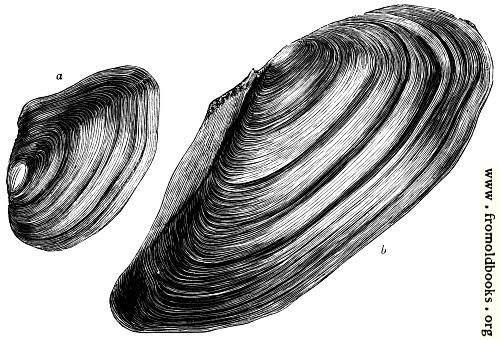 The pearl-fishery of Britain must have existed before the Roman invasion, for Suetonius says that the hope of acquiring pearls was a main inducement to Cæsar to attempt the conquest of the country. The great conqueror himself, according to Pliny, the naturalist, dedicated to Venus a breastplate studded with British pearls, and suspended it in her temple at Rome. In a later age the pearls of Caledonia were poetically termed by Ausonius the white shell-berries. Camden thus describes the pearls of the little river in : “In this brook the shell-fish, eagerly sucking in the dew, conceive and bring forth pearls, or, to use the poet’s words, shell-berries. These the inhabitants gather up at low-water; and the jewellers buy them of the poor people for a trifle, but sell them at a good price. Of these, and such like, Marbodæus seems to speak in that verse,

The British pearls were not found in the shells of the oyster, as is often thought, but in those of a peculiar species of mussel (Fig. 59). The oysters of Britain, celebrated by Pliny and Juvenal after the Roman conquest, contributed, we may reasonably suppose, to the food of the primitive inhabitants.” (p. 22)