52.—Plan of Chambers at Ballyhendondetails 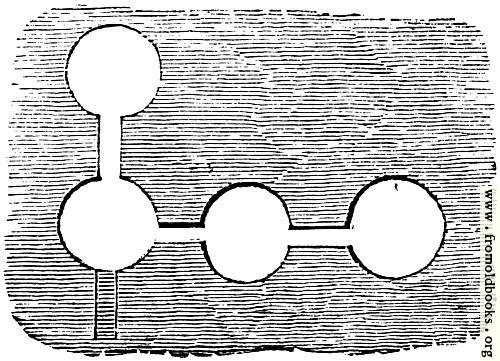 52.—Plan of Chambers at Ballyhendon

Camden has given a rude [crude] representation of two caverns near Tilbury in Essex, “spacious caverns in a chalky cliff, built very artificially of stone to the height of ten fathoms [18 metres, or 60 feet], and somewhat straight at the top. [...]” The universality of the practice is shown in the caves which were discovered in Ireland, in 1829, which are described in the ‘Transactions of the Antiquarian Society of London,’ vol. xxiii. (Figs 52, 53 and 54).” (p. 22)

The caves are about 7 miles North-East of Fermoy, it seems: Mitchelstown Caves, Baile Mhistéala

The table of contents of the transactions mentioned in the text are online: Vol 23 contents of Archaeologia