Godey’s Fashions for May 1870details 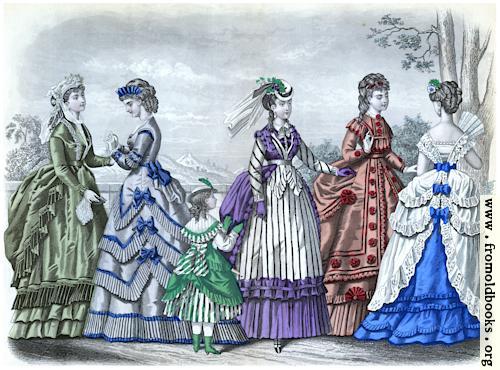 Godey’s Fashions for May 1870 more

Five women and one girl are wearing what to our eyes are sumptuous and very elaborate early Victorian costumes.

Fig. 1.—Walking dress of green silk, made with one skirt and casaque. The skirt is trimmed with two narrow ruffles with a wide box-plaiting above them. The casaque is very bouffant in the back, and trimmed with the plaiting. The waist is turned back with revers and trimmed with white lace. Coat sleeves. White chip bonnet, trimmed with lace, and white flowers, and green leaves.

Fig. 2.—House dress of silver gray poplin, made with one skirt, but trimmed with quillings to simulate several skirts. The quillings are of the same, with a band of blue satin heading them. They are arranged square in front, in points at the sides, and finished with large blue bows. Plain corsage, with postilion jacket in back, heart-shape in front. Coat sleeves, trimmed with quillings at the elbow. Blue velvet diadem in hair.

Fig. 4.—Dress of écru silk made with two skirts; the lower one is trimmed with one ruffle headed by a ruche, with fan-shaped bows at intervals. Upper skirt very bouffant in the back, trimmed with a quilling at the edge, two narrow folds of satin and rosettes between. Plain corsage. trimmed square, with a ruffle bound with satin. Coat sleeves.

Fig. 5.—Underskirt of blue silk, trimmed with a ruffle, scalloped and trimmed with a box-plaited ruche, and two narrow ones heading it. Overdress of white muslin, trimmed with embroidered ruffles, and looped in the back with blue bows. Low square corsage, trimmed with lapels of work. Blue flowers in hair.

Fig. 6.—Dress for little girl of eight years, of green and white striped percale, with an overdress of plain green percale, looped in the back and trimmed with ruffles. Low corsage, with ruffle round the neck, and underwaist of white muslin tucked. Hat of white chip, trimmed with green velvet and small feathers. (p. 491)