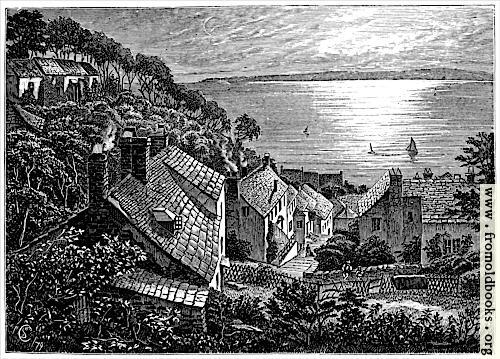 The viewer is looking down a steeply-descending path through a seaside village towards the sea. There are slate rooves and some laundry over a fence.

I tried to follow Hobby Drive down the hill using Google Street View, but it seems the Google Car wasn’t able to navigate it: it’s too narrow.

“And a mighty sing’lar and pretty place it is, as ever I saw in all the days of my life,” said Captain Jorgan, looking up at it. After this quaint fashion Charles Dickens commenced the description of Clovelly with which he opened one of the best of the “All the Year Round” series of Christmas stories. And it would be difficult in a few words to more completely state the case regarding this out-of-the-way picturesque Devonshire fishing village. Singular it certainly is, and of its prettiness there can be no doubt, whether we approach it from land or sea. Looking down upon it from the thickly-wooded heights through which the road known as the Hobby winds towards it, or looking up at it, as Captain Jorgan did, from the little pier or quay, it declares itself on the instant to be a mine of wealth for the artist. No spot can there be found along that most paintable coast of North Devon more justifiably entitled an “artists’ haunt;” indeed, it should be called his head-quarters for the district. The subjects which it offers for his pencil are simply endless and of infinite variety. Be the landscape or marine, picturesquely architectural, figure, or animal painter, given to minute detail, or to broad, bold, expressive sketching, he can be accommodated with all he wants.

Beginning our inspection of the place critically, and with an eye to covering canvas or filling portfolios, we will take our first peep at it from the road by which it is usually reached, viz., the aforesaid Hobby. Striking into this from the Bideford Road, we wind through a park-like pleasaunce studded with trees of every growth and variety, amply satisfying the student devoted to entirely leafy scenes, until by degrees we come upon gaps in the thick foliage through which the sea begins to appear like specks of turquoise fretting the green. These growing larger as the coast is neared, craggy, brown-black rocks and precipitous slopes of dense under-wood, terminating in patches of silvery, stony beach, with the rippling surge breaking on its marge, are revealed. Skirting the top of the cliff, the way still winds in and out, now crossing a tiny rivulet, now plunging into dense umbrageous shade, now coming out upon a wide opening whence, looking north-east, splendid views of the blue Bay of Bideford are to be had as far as Morte and Baggy with their rocky promontories.

Presently blue wreaths of smoke, curling through the foliage, tell of habitations, and then is seen the glint of a slate roof and white cottage perched apparently upon an inaccessible ledge overhanging the sea, and then another and another, and we find ourselves at the top of a small, narrow, precipitous paved lane, with steep banks on either side. At the bottom, a trifle to the left, a coup d’oeil may be had of the “sing’lar and pretty” village, from a little terrace of cottages, smothered with myrtle and fuchsias. Hereabouts is the head of the street, which, running, or rather wriggling, its way down the sheer face of the lofty cliff, is the main thoroughfare of Clovelly. (p.87)