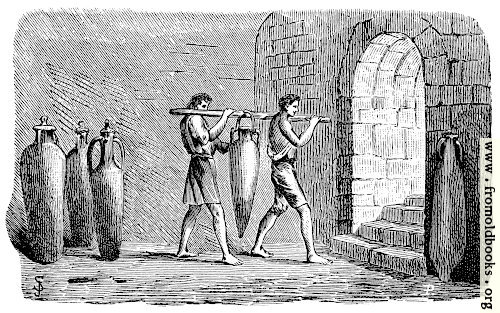 Two men are walking, about to go up the steps and out of a cellar, one in front of the other; they have a wooden post over their shoulders from which a large amphora is suspended, reaching almost to their ankles. The men are barefoot. The foremost male is wearing breeches and is shirtless; the rear one has a simple tunic tied at the waist, but perhaps also a shirt with sleeves down to the elbow.

The woodcut is not captioned, and is used as a tailpiece at the end of a chapter. I have identified the two men as male slaves because of their simple clothing, their bare feet, and the menial work they are doing, given the context of the chapter, which is about ancient Rome. Both men are clean-shaven and the front one is smiling. The amphora, or ceramic water-jug, they carry has a pointed bottom and although some others in the chamber are depicted has having flat bottoms and standing upright on the floor by themselves, one other also has a pointed end.

They might be carrying any liquid but most likely wine or olive oil.