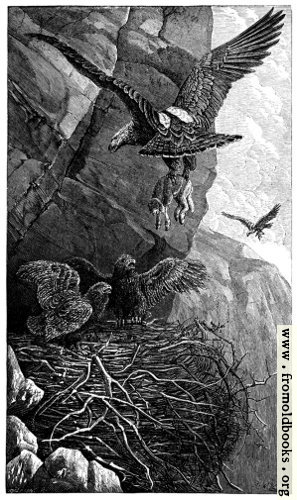 The Eagle., in Palestine more

“Though thou shouldest make thy nest as high as the eagle.”—Jer. xiix. 16.

An eagle flying high in the mountains, carrying in its claws a furry mammal for the two smaller eagles waiting in the nest of twigs in the foreground, another eagle on the wing in the background.

As to the Eagle, rightly so called, there is little doubt that it is one of the many birds of prey that seem to have been classed under the general title of Asniyeh—the word which in the Authorized Version of the Bible is rendered as Osprey. A similar confusion is observable in the modern Arabic, one word, ogab, being applied indiscriminately to all the Eagles and the large falconidæ.

The chief of the true Eagles, namely, the Golden Eagle (Aquila chrysaëtos), is one of the inhabitants of Palestine, and is seen frequently, though never in great numbers. Indeed, its predacious habits unfit it for associating with its kind. Any animal which lives chiefly, if not wholly, by the chase, requires a large district in order to enable it to live, and thus twenty or thirty eagles will be scattered over a district of twice the number of miles. Like the lion among the mammalia, the Eagle leads an almost solitary life, scarcely ever associating with any of its kind except its mate and its young.

Although it lives principally by the chase, it has no objection to carrion, and, as has already been mentioned on page 342, may be seen feeding on a dead animal in company with the lesser vultures, though it retires before the lordly griffon. Being so thinly scattered, it would not be so conspicuous a bird as the griffon, which is not only very much larger, but associates in great numbers, and probably on that account no definite species of Eagle seems to be mentioned in Holy Writ.

Four of five species of Eagle are known to inhabit Palestine. There is, for exampl,e, the Imperial Eagle (Aquila mogilnik), which may be distinguished from the Golden Eagle by a white patch on the shoulders, and the long, lancet-shaped feathers of the head and neck. It is not very often seen, being a bird that loves the forest, and that does not care to leave the shelter of the tres. It is tolerably common in Palestine. (p. 418)