Fabiola, or, the Church of the Catacombs (page 2/2)


The front cover of this book is pinted in black with gold foil on red cloth. There’s a picture of a man in a Roman gown and bare feet standing in an arena looking up at the emperor Diocletian (identified by lettering underneath him) whie a leapard growls. A ded Christan’s feet can be seen on the ground [...] [more...] [$]

Border of Peace from Front Cover.


The front cover of the book includes a border in gold and black on a red background; there are five florets containing symbols of peace, love and Christianity, as well as a vase of wheat and grasses and perhaps palm leaves, and, at the bottom, seven-branched candlestick or Monorah, here symbolizing (perhaps) the seven churches and [...] [more...] [$] 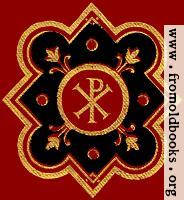 
The Chi-Rho, or Chiro, symbol is a PX monogram from te first two letters of the Greek word for Christ. This gold and christian Px symbol is set in a gold circle surrounded with flowers on [...] [more...] [$]

Decorative Initial letter “I” With sunbathing lady and birds


This “vignetted” initial capital letter I was used as a drop cap at the start of a chapter. It includes two birds (songbirds I think, by their shapes) siting on swirly vines; two urns sprouting out of branches; a trellis with ivy; tulips; and, at the base, a woman wearing a very brief costume of leaves lying in a shady bower, or perhaps darkened [...] [more...] [$] 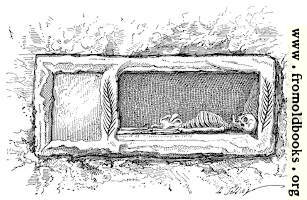 
The picture is showing a burial from the early Christian period, probably in Rome, in a catacomb. [more...] [$] 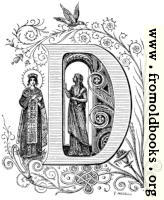 Decorative initial letter “D” with lady and saint and birds


This “vignetted” initial capital letter “D” was used as a drop cap at the start of a chapter. The capital D is framed inside a stylized frond or creeper vine emanating from a vase with fruit on it; behind (to the left of) the D stands a person with a halo (itself giving off fronds) and wearing ornate robes and a crown. I am guesing that this is [...] [more...] [$] 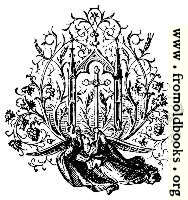 
Engraving showing a woman with wings and a robe at the foot of a large cross, holding it up; the cross is framed in a gothic arch with vines and grapes surrounding it and two ears of wheat in the centre. It was used as a tail-piece, printer’s ornament or [...] [more...] [$]


The letter “Q” surmounted by a bird (a stork?) and with flowers all around, contains a man carrying a pickaxe and wearing a monk’s or cleric’s robe marked with the sign of the cross; at his feet a box or altar with an olive branch and a jug or ewer and the words SÃ SATOR upon it. This decorative letter Q was used as a drop [...] [more...] [$]


The four men in this picture are engaged in burning a large scroll, a Roman decree banning Christianity. They are clean-shaven and short-haired, wear the Roman toga and have bare feet. One thrusts the scroll into the [...] [more...] [$]


A man, barefoot and bare-legged, stands with one hand outstretched, facing away from the viewer. This would be suitable as a border image on one side of a poster, perhaps (you could flip the [...] [more...] [$] 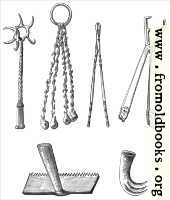 
These six torture implements were captioned instruments of torture employed against the Christians, but they are not actually mentioned in the text. [more...] [$]