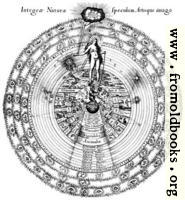 
This engraving, captioned Integra Natura fpeculum Artisque imago, which is, The whole(ness) of nature reflected in the mirror of art, appeared in Utriusque cosmi maioris scilicet et minoris metaphysica, physica atque technica historia by Robert Fludd in 1617/18. The title of the book is roughly translated as The metaphysical, physical, and technical history of the two worlds, namely the greater and the lesser. The image shows a naked woman crowned with the stars and at her feet the sphere of earth and sea, the elements of earth and water; behind her the heavens with the constallations around them. Under her feet the worls, with a monkey holding a globe, and the various works of man. The animal, vegetable and mineral spheres are clearly visible. At the [...] [more...] [$] 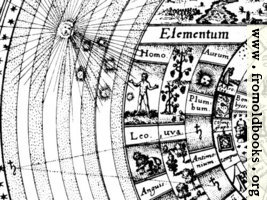 
A computer wallpaper based on a fragment of Nature’s Mirror. [$] 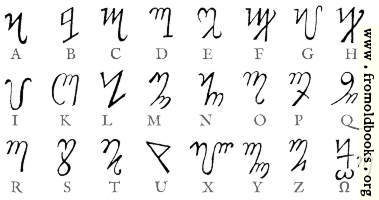 
The source of this alphabet is unclear; Agrippa ascribed it to Honorius. It was used, Agrippa wrote, to make seals naming “certain spirits” so that the writing could not be read. [more...] [$]