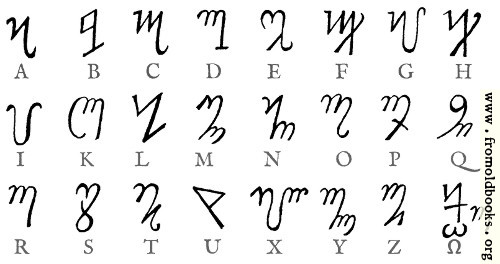 The source of this alphabet is unclear; Agrippa ascribed it to Honorius. It was used, Agrippa wrote, to make seals naming “certain spirits” so that the writing could not be read.

I do not know why a sign for the Greek letter Omega was included; possibly for use as punctuation. Almost certainly the w-like part of that letter should not be present, as that’s a ‘lower-case’ omega and secret letters stop being secret if they are labeled! Probably it’s there by mistake of the trascriber from the captions in the manuscript.