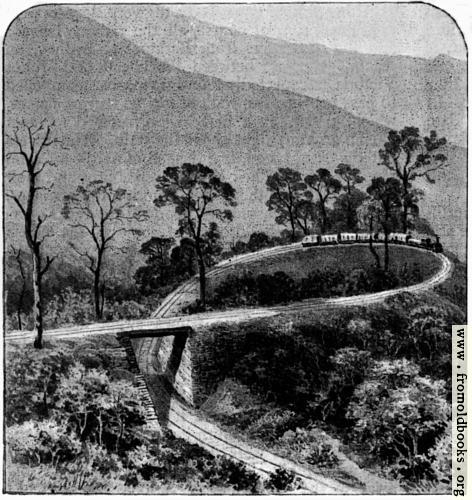 The line has done wonders in the development of a valuable tea district, and is returning a revenue to the Treasury of India of about £20,000 a year, besides its dividend to the company which constructed it.

In order to meet the new requirements of the situation, the centre of gravity of engines and waggons is placed as low as possible, giving a singularly dwarfed appearance to the whole plant. This is rendered necessary by the fact that the gauge of the line could be made only two feet, while curves not exceeding a sixty-foot radius occur in several lengths of the line.

In spite of its narrow gauge and dwarf engines and waggons, the line is in all respects a model of constructioon The rails are substantial, weighing forty-five pounds to the yard, and everything else is in proportion. The difficultis of the undertaking can be estimated when it is stated that the average grade for the wholw distance of forty-five miles is about one in thirty-three, while there are many parts of the line at which a grade of one in twenty prevails. The speed in use is ten miles an hour in ascending, while on the descending trip it is limited to eight miles.” (p. 253)

The picture here shows a loop in the railway, in which the track goes over a bridge crossing its own path. A steam train is on its way up and round the loop.