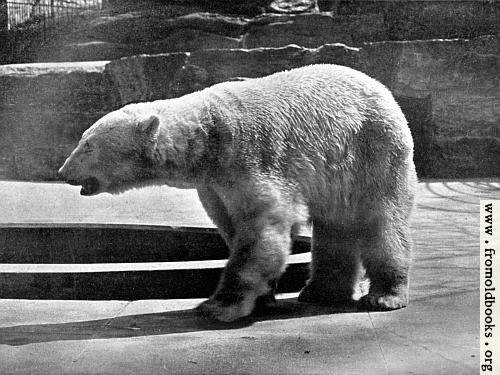 The Polar Bear is the beach ranger of the northern seas. Other bears the world over keep to the shady thickets and forest tangles, where, when the hunting is poor, they can gather wild berries and nuts, and grub roots out of the black earth. But the polar bear rarely tastes vegetable food except in the few short weeks of an Arctic summer. In the desolate, treeless north, he shuffles along over ice-crusted ridges, powdered with snow. His favourite hunting grounds are along the margin of the ice-fields, where the drifting floes grind against the fixed ice of the shore line, and rend and split with the heaving of the ocean. Here he watches for seals at their breathing holes, as patiently as a cat watches for mice, of stalks them under cover of the ice cakes at the edge of the breakers.” (p. 255)

I cropped this photo slightly so that it would have the same aspect ratio as most computer screens (4:3), so that you can use it as a “wallpaper” or desktop background.