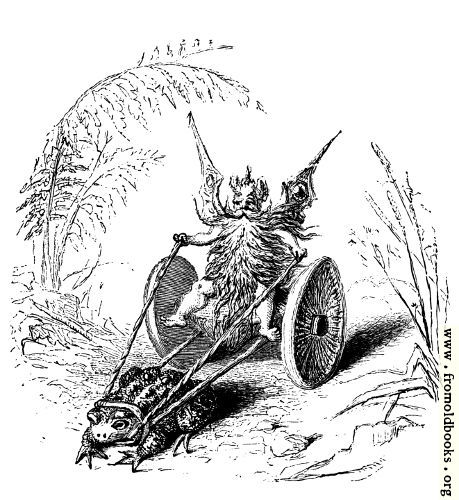 Scudder, Horace Elisha: “Doings of the Bodley Family in Town and Country” (1876)

Who lived by themselves

On a mountain high,

And scorned the fairies thta dwelt below.

But Rufflecumtuffle was a real dandy,

With whiskers flowing wide and sandy;

And had wonderful wings

Painted with gold and scarlet rings;

And he longed to dance in the fairies’ hall,

For he knew he must outshine them all.

So Rufflecumtuffle determined to go,

And did not mean that the others should know.

He sought for a steed,

To take him down the mountain with speed;

His long-tailed mouse that pranced so gay

So he had to harness an honest toad

To his mushroom car, and take the road.

Twice on the way, his car broke down;

Ans while he patched it with sticks and things,

He was heard to say, “By lack and by brown,”

He was tempted to take to his wings.

But safely he reached the fairies’ hall,

And was kindly and gayly greeted by all.