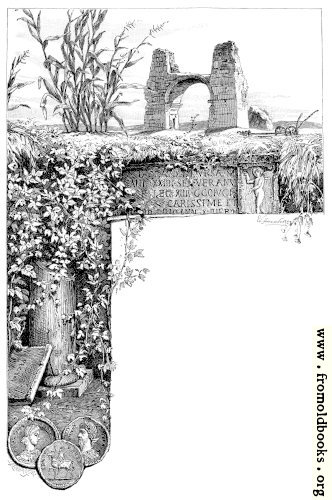 The border includes a stone pillar with perhaps ivy growing over it, some old coins (possibly Roman) and a Latin inscription with a bas-relief sculpture of a winged boy, a cupid. There’s a ruined arch in the background, a plough, and some grasses. The arch is “Heathen’s Gate” or the Heidentor, a late Roman arch in Petronell-Carnuntum in Austria.

This border is around the first page of an article about architecture in Lower Austria.

Google Translate gives me, Border: the Heidenthor in Betronelle and objects found there from Roman times, by Eduard Ameseder.

(The German word at the start means to full or to stuff, rather than border, but might have had this connotation at the time)