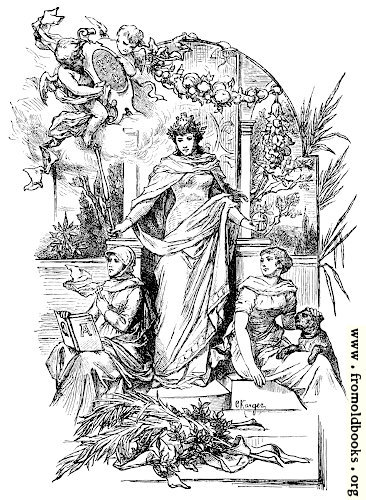 This engraving shows a queen holding her globus cruciger (an orb with a cross on top symbolizing spiritual and temporal power) and a wand or sceptre (or possibly a spear); she wears a crown and what might be a Roman-style dress. To her right sits a prist, priestess, or nun, with a cross and a book, presumably the bible since its covers bear the letters alpha and omega, the Greek for the beginning and the end; to her left a girl pets a dog. Above, a cherub holds aloft a shield with five stars.

It’s likely that this depicts someone specific, quite likely an Austrian queen, or possibly a mythological character such as the warrior-goddess Brigantia.