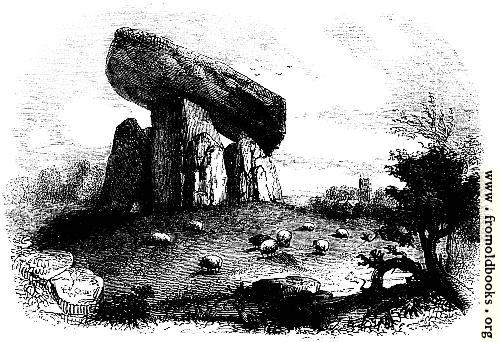 Trevethy Stone, also known as Trethevy Quoit, is a Domen or Cromlech near Liskeard in Cornwall.

The Modern Antiquarian has some photographs.

At Plas Newydd, in the Isle of Anglesey, are two cromlechs (Fig. 40); and it is believed that these remains confirm the account of Tacitus, and that they were the altars upon which the victims were sacrificed. Near Liskeard, in Cornwall, in the parish of St. Clear, is a cromlech called Trevethy Stone, Trevedi being said to signify in the British language a place of graves (Fig. 39). In the neighbourhood of Lambourn, in Berkshire, are many barrows, and amongst them is found the cromlech called Wayland Smith (Fig. 42). The tradition which Scott has so admirably used in his ‘Kenilworth’ that a supernatural smith here dwelt, who would shoe a traveller’s horse for. a “consideration,” is one of the many superstitions that belong to these places of doubtful origin and use, a remnant of the solemn feelings with which they were once regarded.” (p. 11)