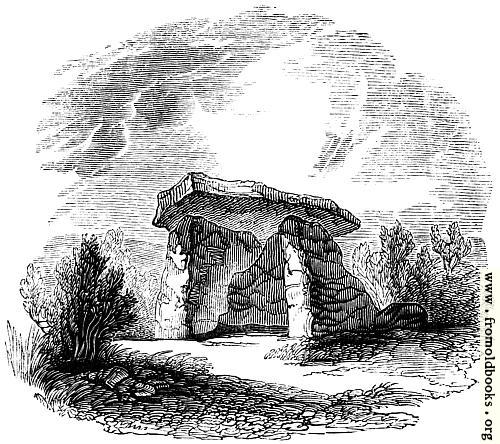 Another picture of King’s Coty’s House; compare Fig. 37. There is also a picture of this in Francis Grose’s Antiquities.

Antiquaries have puzzled themselves about the name of this Kentish monument. Kit, according to Grose, is an abbreviation of Catigern, and Coty is Coity, coit being a name for a large flat stone; so that Kit’s Coty House is Catigern’s House built with coits. Lambarde expressly says, “now termed of the common people here Citscotehouse.” The familiar name has clearly no more to do with the ancient object of the monument than many other common names applied to edifices belonging to the same remote period. No one thinks, for example, that the name of ‘Long Meg and her daughters,’ of which we have spoken, can be traced back even to the Saxon period. The theory of the earlier antiquaries that the monuments which we now generally call Druidical belong to a period of British history after the Christian era, and commemorate great battles with the Saxons or the Danes, is set at rest by the existence of similar monuments in distant parts of the world; proving pretty satisfactorily that they all had a common origin in some form of religious worship that was widely diffused amongst races of men whose civil history is shrouded in almost utter darkness. Palestine has its houses of coits as well as England. The following description is from the travels of Captains Irby and Mangles: “On the banks of the Jordan, at the foot of the mountain, we observed some very singular, interesting, and certainly very ancient tombs, composed of great rough stones, resembling what is called Kit’s Coty House in Kent. They are built of two long side stones, with one at each end, and a small door in front, mostly facing the north: this door was of stone. All were of rough stones, apparently not hewn, but found in flat fragments, many of which are seen about the spot in huge flakes. Over the whole was laid an immense flat piece, projecting both at the sides and ends. What rendered these tombs the more remarkable was, that the interior was not long enough for a body, being only five feet. This is occasioned by both the front and back stones being considerably within the ends of the side ones. There are about twenty-seven of these tombs, very irregularly situated.” These accomplished travellers call these Oriental monuments tombs, but their interior dimensions would seem to contradict this notion. The cause of these narrow dimensions is clearly pointed out; the front and back stones are considerably within the ends of the side ones. Kit’s Coty House (Figs. 37, 38) has no stone that we can call a front stone; it is open; but the back stone has the same peculiarity as the Palestine monuments; it is placed considerably within the side ones. The side stones lean inwards against the back stone; whilst the large flat stone at top, finding its own level on the irregular surfaces, holds them all firmly together, without the mortice and tenon which are required by the nicer adjustment of the superincumbent stone upon two uprights at Stonehenge. It is evident that the mode of construction thus employed has preserved these stones in their due places for many centuries. The question then arises, for what purpose was so substantial an edifice erected, having a common character with many other monuments in this country, and not without a striking resemblance to others in a land with which the ancient Britons can scarcely be supposed to have held any intercourse? It is maintained that such buildings, called cromlechs, were erected for the fearful purpose of human sacrifice.” (p. 11)