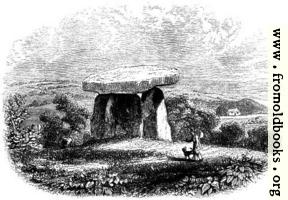 Kit’s Coty House is a neolithic chambered tomb. It is mentioned in Pepys’ diary, but has suffered damage since this plate was made.

We shall have presently to speak of the singular erection near Maidstone, called Kit’s Coty House. Near this supposed cromlech are some large stones, scattered about a ploughed field. A coachman, who was duly impressed with the claims of Kit’s Coty House to notice, told us, as the climax of the extraordinary things connected with it, that no one had ever been able to count the stones in that field, so that it was impossible to say what was their exact number. In the neighbourhood of Stanton Drew, they have a variation of this belief which does not go quite so far. They simply hold that it is wicked to attempt to count the stones.” (p. 11)

There are more pictures of this and other ‘druidical’ remains in Francis Grose’s Antiquities.