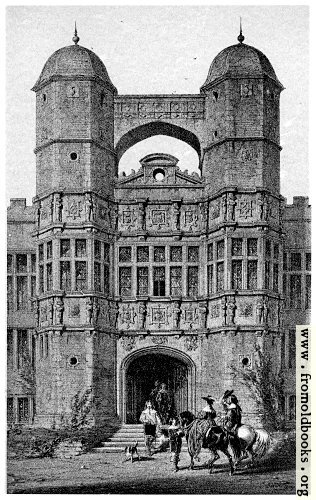 Brereton Hall was built in 1586 and is a Grade I listed building. It is a private home today. The foundation stone was said to have been laid by Queen Elizabeth I, although there was a manor house at this location as far bask as the twelfth century, owned by the same Brereton family that had the current house built.

Towards the end of the [Sixteenth] century gateways, either square as at Cranbourne (Plate CIII) and Montacute (Plate LXXXVI), or with octagonal towers on each side as at Brereton (Plate XXII), were used for the entrance. In appearance, little of the fortified character was retained beyond, in certain cases, the battlements with which the walls were surrounded, more for ornament than use—a feature we [also] find in churches of the period. (p. iv)

I also found an article that places Brereton Hall in context with other English “Prodigy”houses of the period, competing for the attention of Queen Elizabeth I: Article at The Country Seat.