Collection of alms at the funeral of don Álvaro de Lunadetails 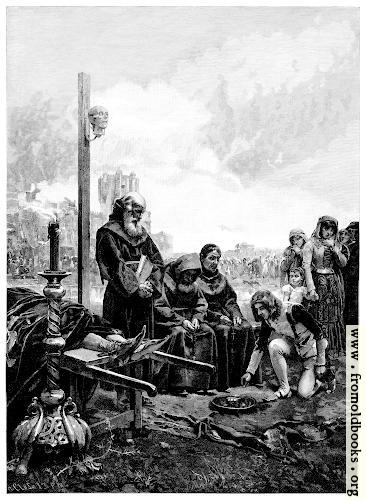 Collection of alms at the funeral of don Álvaro de Luna

“Moderne Kunst in Meister-Holzschnitten Band I” (1895)

Collection of alms at the funeral of don Álvaro de Luna

The picture shows a young man on one knee throwing a coin into a plate next to a bier; on the bear is a man we see only by his ankles and feet (clad in hose and pointy shoes). A bald-headed bearded priest or monk stands by the biear and other figures appear sad. There is a post with a skull attached near the top of it, and a in the foreground a burning candle in a large ornate holder.

This is a scan of an 1885 engraving of an 1884 genre painting in oils by the Spanish artist Manuel Ramírez Ibáñez.

Álvaro de Luna y Fernández de Jarava (c. 1388 – 1453) was a friend of the King of Spain at the time, but was executed when the Queen took a dislike to him after he was involved in too much intrigue.