The only system of pulleys frequently employed for hoisting is what is called the second system, where there are two blocks of pulleys, one attached to the weight, and the other to the beam; and where the same rope passes round all (fig. 57). The mechanical advantage in this case is simply equal to the number of strings sup­porting the [...] [more...] [$] 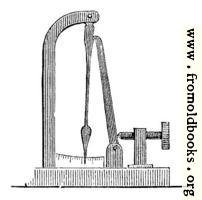 
139. A combination of levers is sometimes used, but more often for the purpose of magnifying small motions than for exerting great force; that is, for increasing the factor s in the product work at the expense of the factor F. In fig. 58 the motion of the screw is magnified, the pointer describing a considerable arc for one turn of the screw. (p. 138) [more...] [$] 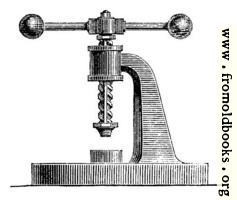 
A lever and an inclined plane may be combined together into a screw-press, the incluned plane being coiled up into a spiral or screw-thread (fig. 59). For every complete revolution of the lever, the weight is raised a distance equal to that between the spires of the screw-threads; hence the mechanical advantage of such a press is the circumference [...] [more...] [$] 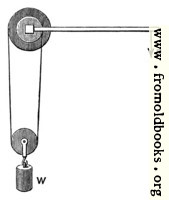 
A pulley is often used in conjunction with a capstan, the rope passing round a pulley attached to the weight, and the mechanical advantage of the capstan is thereby doubled. Moreover, the free end of the [...] round another smaller axle with the same centre F, so that its tension shall help the force P (fig. 60). By this means the mechanical advantage can be increased to any desired extent, for the weight is now would up only becuase the cord wraps itself on to one, the larger, axle faster than it unwraps itself from the other smaller axle; and the two axles may be as nearly the same size as one pleases. The mechanical advantage is the radius of the wheel (or the length of P’s arm) divided by the difference of the radii of the two axles, the whole being multiplied by two because of the pulley. (p. 138) [more...] [$] 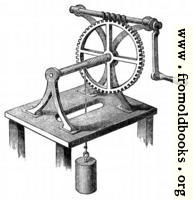 61.—Wheel and axle comined with a screw.


A wheel and axle may be combined with a screw, as shewn in the contrivance of fig. 61. When the handle is turned, the screw-thread on its axle sends the cog-wheel forward one tooth for every revolution. Such [...] but which merely rotates in ordinary bearings, is called an ‘endless’ screw. (pp. 139, 140) [more...] [$]