Frontispiece: Alice and the White Knightdetails 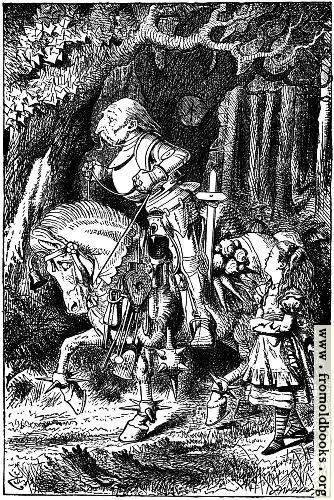 Frontispiece: Alice and the White Knight

“It was a glorious victory, wasn”t it?’ said the White Knight, as he came up panting.

“I don’t know,” Alice said doubtfully. “I don’t want to be anybody’s prisoner. I want to be a Queen.”

“So you will, when you’ve crossed the next brook,” said the White Knight. “I’ll see you safe to the end of the wood—and then I must go back, you know. That’s the end of my move.”

“Thank you very much,” said Alice. “May I help you off with your helmet?” It was evidently more than he could manage by himself; however, she managed to shake him out of it at last.

“Now one can breathe more easily,” said the Knight, putting back his shaggy hair with both hands, and turning his gentle face and large mild eyes to Alice. She thought she had never seen such a strange-looking soldier in all her life.

He was dressed in tin armour, which seemed to fit him very badly, and he had a queer-shaped little deal box fastened across his shoulder, upside-down, and with the lid hanging open. Alice looked at it with great curiosity.

“I see you’re admiring my little box,” the Knight said in a friendly tone. “It’s my own invention—to keep clothes and sandwiches in. You see I carry it upside-down, so that the rain ca’n’t get in.”

“But the things can get out,” Alice gently remarked. “Do you know the lid’s open?”

“I didn’t know it,” the Knight said, a shade of vexation passing over his face. “Then all the things much have fallen out! And the box is no use without them.” He unfastened it as he spoke, and was just going to throw it into the bushes, when a sudden thought seemed to strike him, and he hung it carefully on a tree. “Can you guess why I did that?” he said to Alice.

“In hopes some bees may make a nest in it – then I should get the honey.”

“But you’ve got a bee-hive—or something like one—fastened to the saddle,” said Alice.

“Yes, it’s a very good bee-hive,” the Knight said in a discontented tone, “one of the best kind. But not a single bee has come near it yet. And the other thing is a mouse-trap. I suppose the mice keep the bees out—or the bees keep the mice out, I don’t know which.”

“I was wondering what the mouse-trap was for,” said Alice. “It isn’t very likely there would be any mice on the horse’s back.”

“Not very likely, perhaps,” said the Knight; “but if they do come, I don’t choose to have them running all about.”

“You see,” he went on after a pause, “it’s as well to be provided for everything. That’s the reason the horse has all those anklets round his feet.”

“But what are they for?” Alice asked in a tone of great curiosity.