The black kitten with a ball of twinedetails 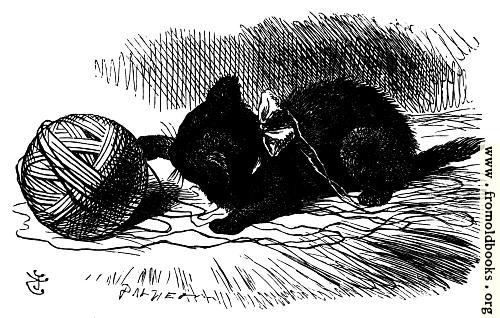 The black kitten with a ball of twine more

The black kitten with a ball of twine

The kitten has a ball of wool or a ball of string (“twine” in the text might be either, except that later it’s referred to as “worsted” and is thus wool.)

But the black kitten had been finished with earlier in the afternoon, and so, while Alice was sitting curled up in a corner of the great armchair, half talking to herself and half asleep, the kitten had been having a grand game of romps with the ball of worsted Alice had been trying to wind up, and had been rolling it up and down till it had all come undone again; and there it was, spread over the hearth-rug, all knots and tangles, with the kitten running after its own tail in the middle. (p. 2)