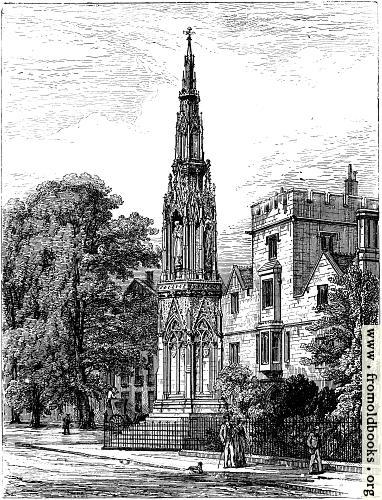 “In Broad Street, under the windows of Balliol, there is a small stone cross in the pavement. This marks the place where, some years ago, a great heap of wooden ashes was found. These ashes were the remains of the fire of October 16th, 1555—the day when Ridley and Latimer were burned. “They were brought,” says Wood, “to a place over against Balliol College, where now stands a row of poor cottages, a little before which, under the town wall, ran so clear a stream that it gave the name of Canditch, candida fossa, to the way leading by it.” To recover the memory of that event, let the reader fancy himself on the top of the tower of St. Michael’s, that is, immediately above the city wall. No houses interfere between him and the open country, in which Balliol stands; not with its present frontage, but much farther back. A clear stream runs through the place where is now Broad Street, and the road above is dark with a swaying crowd, out of which rises the vapour of smoke from the martyrs’ pile. At your feet, on the top of Bocardo prison (which spanned the street at the North Gate), Cranmer stands manacled, watching the fiery death which is soon to purge away the memory of his own faults and crimes. He, too, joined that “noble army of martyrs” who fought all, though they knew it not, for one cause—the freedom of the human spirit.” (pp. 98-100)

When I last visited Oxford, I photographed the memorial: Martyr’s Memorial and again here. It was designed by Sir George Gilbert Scott, built in 1843 and restored in 2003.

The caption says, From an Etching by R. Kent Thomas.