The Muniment Room at Merton Collegedetails 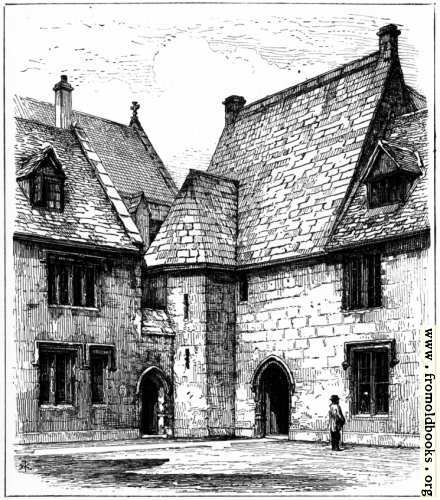 The Muniment Room at Merton College

From a Drawing by R. Kent Thomas.

(I think the Muniment Room was built to hold manuscripts, but I am not certain)

The time is the end of the fourteenth century. The forest and the moor stretch to the east gate of the city. Magdalen bridge is not yet built, nor of course the tower of Magdalen, which M. Brunet-Debaines has sketched from Christ Church walks. Not till about 1473 was the tower built, and years would pass after that before choristers saluted with their fresh voices from its battlements the dawn of the first of May, or sermons were preached from the beautiful stone pulpit in the open air. When our undergraduate, Walter de Stoke, or, more briefly, Stoke, was at Oxford, the spires of the city were few. Where Magdalen stands now, the old Hospital of St. John then stood – a foundation of Henry III. – but the Jews were no longer allowed to bury their dead in the close, which is now the “Physic Garden.” “In 1289,” as Wood says, “the Jews were banished from England for various enormities and crimes committed by them.” The Great and Little Jewries – those dim, populous streets behind the modern Post Office – had been sacked and gutted. No clerk would ever again risk his soul for a fair Jewess’s sake, nor lose his life for his love at the hands of that eminent theologian, Fulke de Breaute. The beautiful tower of Merton was still almost fresh, and the spires of St. Mary’s, of old All Saints, of St. Frideswyde, and the strong tower of New College on the city wall, were the most prominent features in a bird’s-eye view of the town. But though part of Merton, certainly the chapel tower as we have seen, the odd muniment-room with the steep stone roof, and, perhaps, the Library, existed; though New was built; and though Balliol and University owned some halls, on, or near, the site of the present colleges, Oxford was still an university of poor scholars, who lived in town’s-people’s dwellings.” (p. 57)

The Muniment Room was used to hold important College records such as the charter, statutes, and deeds for the College estates. The College accounts were sometimes kept here as well. Copies of some of these documents are still kept in this room (with back-up copies in a modern safe deposit box in town in case of fire). It served a similar purpose to the University Chest room in Great St Mary’s at Cambridge. (I’m a member of Merton College and served as Junior Dean during the year 2005-06, when I learned some interesting bits about the history of the College from Professor Emeritus Roger Highfield, the College historian.)