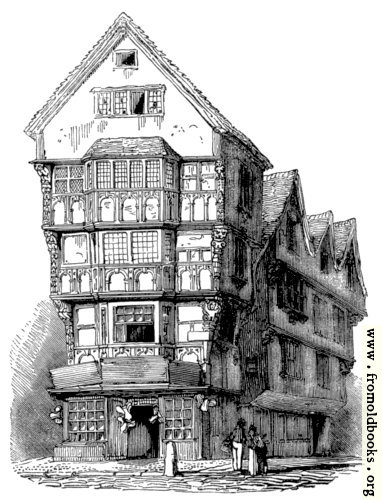 Old Shop, corner of Fleet Street and Chancery Lane in 1799

The general character of shops in olden London was to have the wares exposed openly to the street, without any barrier of glass between the buyer and seller. Wherever our old topographers and chroniclers give a representation of a London shop—at least [before] the time of Queen Anne [1702 – 1714]—this was the observable feature. The shop, too, unlike those of modern days, was generally smaler than the rooms above, on account of the overhanging of each floor or story beyond the one beneath it. There are yet remaining at the south end of Gray’s Inn Land, and in a few other parts of London, specimens of this curious variety of domestic architecture; although most of such houses now display the luxury of a window to the shop. (p. 386)

There is a print in Smith’s ‘Antiquities of London,’ of which we give a copy at the head of our paper, of a house which stood at the corner of Chancery Lane so late as the year 1799, where now stands the large and modern residence and shop of a robe-maker. If this house had not undergone alteration, then it would seem to show that shop-winders were tolerably common in the time of Edward VI. [1547 – 1557], the date to which the house was referred. The print presents to view a small double-parted shop, having hanging on the outside several articles for sale which look like saddles; and over this are five stories of private apartments, each of three projecting beyond the one beneath it, and all decorated in a highly curious manner. But the shop windows do not by any means accord with the general character of the front, and give evidence of having been put in at a later date; indeed, this is rendered certain by a paragraph which Smith quotes from the ‘Morning Herald’ of May 20, 1799:—“The house in fleet Street, which the City is now pulling down to widen Chancery Lane, is the oldest in that street, being built in the reign of Edward VI. [1547 – 1553] for an elegant mansion, long before there were any shops in that paart of the City. (p. 387)