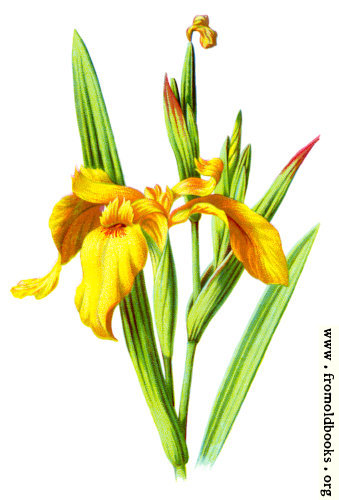 A yellow flower with long thin leaves of green tinged with red at their pointed tips.

Among the many beautiful flowers that fringe our rivers, the yellow iris, the plant fugured in the present plate, is one of the most beautiful and conspicuous, being perhaps only less striking than the water-lilies, to which pre-eminence over all their lovely rivals must surely be accorded. The plant is known botanically as the Iris pseudacorus.

Provincially it is often called “segg,” a corruption of the word sedge, and both derived from the Anglo-Saxon word segg, a small sword, the name being employed in obvious allusion to the long sword-shaped leaves that rise so boldly from the water. it is also called the fleur-de-lys and the yellow flag, the outer segments of the perianth fluttering in the breeze in a degree that suggested to some early writers the waving of a flag. The resemblance of the blossom to the heraldic fleur-de-lys is too far-fetched to make the name at all appropriate, the device in blazonry being, in fact, so arbitrary and conventional in nature that some half-dozen objects of the most diverse character have been selected by various theorists as being the probable types natural or otherwise, on which the form was based. (p. 57)