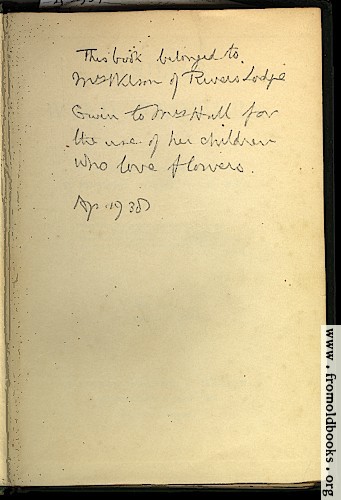 Inscription in the book more

Inscription in the book

My copy of the book has my father’s signature, Eric A. Quin, on the inside of the cover and, opposite, this inscription.

This book belonged to Mrs. Wilson of River’s Lodge.

Given to Mrs. Hull for the use of her children who love flowers.

My father’s birthday was in April so maybe that was what occasioned the gift; Mrs. Hull was his mother’s name after she remarried.

River’s Lodge in Harpenden has been converted ot offices, but the building still appears as it would have done when my father was a boy. The Mrs. Wilson mentioned might have been Theodora Wilson (1867-1966) but since she moved out in 1926 and the inscription is dated 1930 I must suppose it more likely to have been her mother or one of her sisters.

History of Harpenden and Theodora Wilson