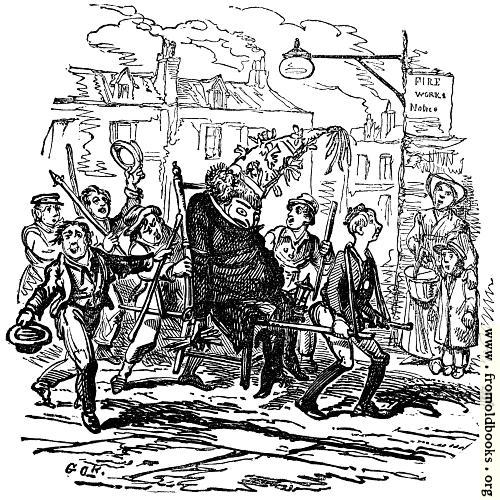 Boys carry a stuffed dummy, a straw-stuffed effigy of Guy Fawkes, through a town; the figure is arranged on a chair supported by two poles, a litter. In the background people watch, or raise their hats and cheer. A sign reads “fire works notice” because it is traditional in England, on the 5th of November each year, to light a bonfire, to burn the effiguy of Guy Fawkes, and to set off fireworks.

Guy Fawkes, of course, was implicated in a papist plot to overthrow the government and reinstate Roman Catholicism into England, in 1605.

Scuffles seldom happen now, but “in my youthful days,” “when Guy met Guy —then came the tug of war!” The partisans fought, and a decided victory ended in the capture of the “Guy” belonging to the vanquished. Sometimes desperate bands, who omitted, or were destitute of the means to make “Guys,” went forth like Froissart’s knights “upon adventures.” An enterprise of this sort was called “goiong to smug a Guy,” that is, to steal one by “force of arms,” fists, and sticks, from its rightful owners. These partisans were always successful, for they always attacked the weak.