My copy does not have an original binding. Actually the binding is broken and many of the pages are loose. I suspect that some previous bookseller may have removed [...] [more...] [$]


Art in England During the Elizabethan and Stuart Periods [more...] [$] 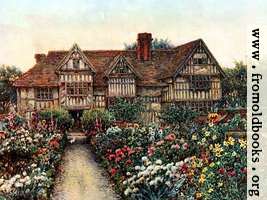 
A version of Rumwood Court scaled and cropped to make it suitable for use as a screen background or ‘desktop wallpaper’. [more...] [$] 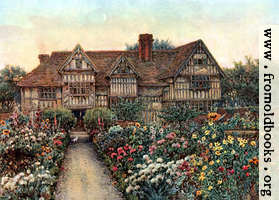 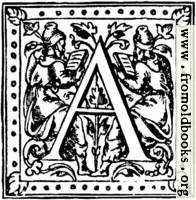 Initial Capital Letter “A” With Scholars


This historiated decorative initial “A” was used as a drop cap, or dropped capital, at the start of a chapter. It shows two people wearing hats and robes and I think soft turned-down [...] [more...] [$]


Thus, in former times (as may be seen, for instance, in the older houses at Bury St. Edmunds or Lavenham, in Suffolk) brackets would be made to spring from Gothic caps, which again formed the crown of engaged boutel-shafts running down to the base, so that the thrust and weight of the upper storey [...] [more...] [$]