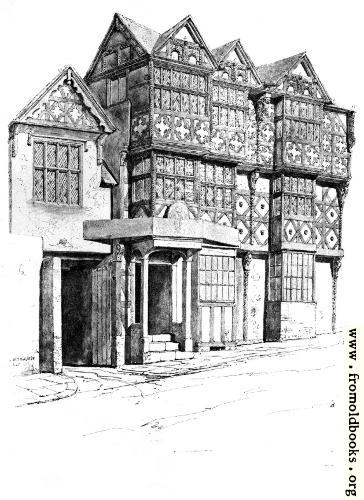 Thus, in former times (as may be seen, for instance, in the older houses at Bury St. Edmunds or Lavenham, in Suffolk) brackets would be made to spring from Gothic caps, which again formed the crown of engaged boutel-shafts running down to the base, so that the thrust and weight of the upper storey seems mightily sustained by the solid eath itself.

The “Feathers” Inn at Ludlow (facing page 10) is a rare instance of this organic system being carried out in a building of the post-Gothic period. For at that time, for the most part, brackets, being unsupported from below, jutted out abruptly from the face of the wall, a plan which makes them seem to strain under the oppression of the huge mass which they have to carry. (p. 14)