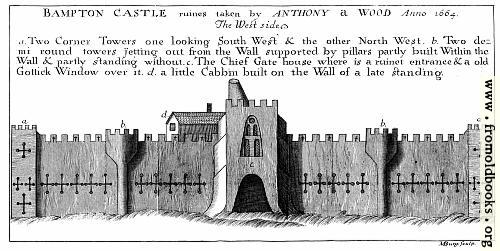 a. Two Corner Towers one looking South West & the other North West. b. Two demi round towers jetting out from the Wall supported by pillars partly built Within the Wall & partly standing without. c. The Chief Gate house where is a ruinet [ruined] entrance & a old Gottick [Gothic] Window over it. d. a little Cabbin built on the Wall of a late standing.

The engraving is signed MBurg. sculp.

Although perhaps not the most artistic or romantic of engravings, I have reproduced this in case it is of interest. The scan is quite poor, although I have cleaned it fairly aggressively.

There was a Roman fort at Bampton, but the present castle probably dates to the 12th century. It was largely destroyed by an earthquake in about 1607. Today there seems to be much less castle than depicted here. This woodcut is from Volume II.