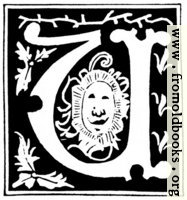 
This capital letter “U” is suitable for use as a drop cap (dropped capital) or a decorative initial; there’s also a small version for an avatar or icon. It shows a sun, with rays and a face rather like a lion; perhaps it would be good for a chapter opening in a Narnia book! Note that this is [...] [more...] [$]


This reddish-yellow sun face has an out-of-control hairdo and a cute smile; it’s a detail from a Sixteenth Century decorative initial letter “U”. [more...] [$] 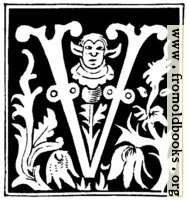 
This capital letter “V” is suitable for use as a drop cap (dropped capital) or a decorative initial; there’s also a small version for an avatar or icon. It includes a mediæval court jester! Note that in 16th century manuscripts this letter would [...] [more...] [$] 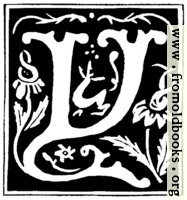 
This capital letter “Y” is suitable for use as a drop cap (dropped capital) or a decorative initial; there’s also a small version for an avatar or icon. It [...] [more...] [$]


This is not a good scan; I plan to replace it with one made at a higher resolution. It is an alphabet with some ornate decoration and flourishes. [more...] [$]


The closest cross I could find to this one is the symbol used in Cabbalistic mysticism representing a Holy Name. It is also similar to the cross used by the pope and other Papist dignitaries alongside their [...] [more...] [$]


The monogram IHS comes from the Greek for Jesus, IHESUS, or from the Latin Ihesus Hominum Salvator, which is, Jesus, saviour of Mankind (Jesus was the name of a religious person). A modern interpretation is In His Service. [more...] [$]


This symbol is part-way between a clover-leaf, a Lutheran Cross and they sign for the playing-card suit of clubs, which in turn derives from the alchemical symbol for wood. [more...] [$]


A decorative cross. The outer part is an anchor cross or a fleur-de-lys cross. I have no further information on this one. [more...] [$]


This might be a symbol representing a crown, with the crosses implying rule over a spirtual realm but with temporal power, such as an abbot or bishop. I don’t know what the hairstyle is about. Maybe it’s just a totally gothic cross. Or more likely [...] [more...] [$]


Perhaps the circle represents the world, the inner signs the four nails used to crucify the naked Jesus, the outer branches of the cross with the fleurons representing the religion itself. This would make it a variation of the symbol for evangelists, perhaps [...] [more...] [$]