The seamless undergarment of Jesusdetails 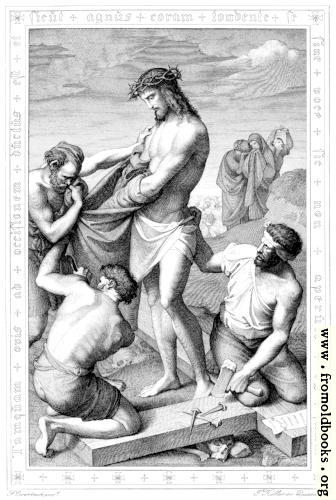 The seamless undergarment of Jesus more

The seamless undergarment of Jesus

This digital reproduction of an engraving after a painting or drawing by J. F. Overbeck shows Jesus wearing his crown of thorns and removing his robe; one of the Roman soldiers has a hand on Jesus’ “seamless undergarment” and Jesus is shown not resisting. At his feet the cross is ready, and, beneath it, two skulls, signifying impending death.

Often a single skull at the base of the cross is used because the hill outside Jerusalem on which the execution took place was called Skull Hill, or Golgotha: it was shaped like a skull. In the case of this engraving I think the skulls represent only death, however.

The Latin text in the frame is from Acts of the Apostles chapter eight, virst thirty-two (Acts xiii 32) and reads, Tanquam ovis ad occisionem ductus et sicut agnus coram tondente se sine voce, sic non aperuit os suum, which is, roughly, As a sheep led to the slaughter and like a lamb without voice before his shearer, so opened he not his mouth and in turn quotes Isaiah 53:7.