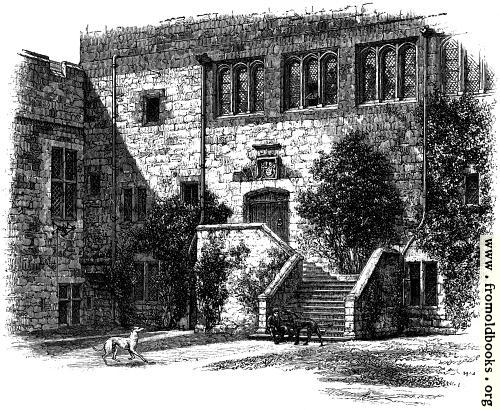 The story of the ill-planned rising of the Earls of Northumberland and Westmoreland has already been told. One of their associates was Leonard Dacre, who held the castle of Naworth, and gathered round him the ‘rank riders of the Borders.’ Elizabeth ordered him to be apprehended, and Lord Hundson set out from Berwick to join Lord Scroop at Carlisle, that with their combined forces they might attack Naworth. But Leonard Dacre attempted to surprise Lord Hundson on his way, by the little stream of the Gelt. It was but a skirmish, in which Dacre was defeated and fled, but it saved the allegiance of the North for Queen Elizabeth, and dealt a decisive blow at the rebellion.” (p. 117)

The castle was built in the 14th century, replacing an earlier (13th century) construction. The artist has included a young man sitting on the steps, petting a dog, a setter I think. The young man (or boy?) wears a hunting cap and long riding boots.