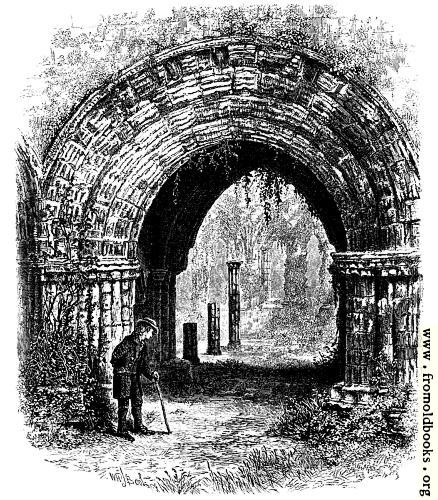 [...] at the time of the Domesday survey [c. A.D. 1080] there was no county of Lancashire, but the three portions which the county now contains lay scattered. The district of Cartmell had been detached from Cumberland, and together with Amunderness, formed part of Yorkshire. The southern lands were held by the Crown, and tended to form part of the great earldom of Chester. [...] Stephen, before his accession to the Crown, held a great part of them, and deserves to be remembered for his foundation, in 1127, of the Cistercian monastery of Furness. There the monks carried on the work of clearing the land and promoting agriculture; and their civilising influence spread far and wide over the desert region that lay north of Morecombe Bay. (p. 139)

Wikipedia gives a date of 1123 rather than 1127, but historical dates are often hard to convert to a modern calendar exactly. The engraving seems to be signed W. H. J. Boolins, although I can’t find anything about such an artist.