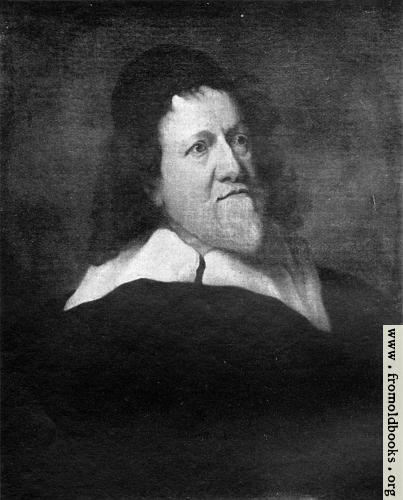 Inigo Jones, along with Sir Christopher Wren, is surely one of the most famous of architects in England.

Inigo Jones was born on July 15, 1573, in the Parish of St. Bartholemew’s Smithfield, and was christened four days later, as is proved by the baptismal register of the church of St. Bartholemew the Less, where can be read the entry: “Enego Jones, the sonne of Enego Jones, was christened the xixth day of July, 1573.” In two other entries concerning brothers and sisters of Inigo, the Christian name of the father is variously spelt Enygo, Enygoe, and Inygoe, and the surname Johnes and Johans.” (p. 53)

The picture here is probably a photograph taken by Emery Walker of one of the portraits of Inigo Jones painted by Van Dyck/Vandyck. At any rate it is captioned Emery Walker.