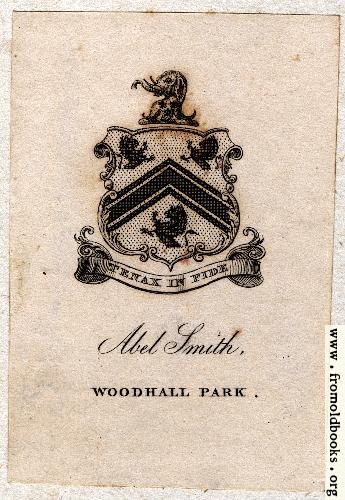 The same bookplate is pasted into each of the four volumes. It has an heraldic crest, family shield, or coat of arms, with the motto tenax in fide, which is, “Steadfast in [the] faith” and is the motto of the Smith family. The name ‘Abel Smith’ appears under the crest, and this may be Abel Smith of Woodhall Park, born 17th July 1788 and died 23rd February 1859; a theory strengthened by the words ‘Woodhall Park’ appearing on the bookplate.

The size listed is for the crest itself, not including the name or the words ‘Woodhall Park’ at all.

Abel Smith (1788 – 1859) was a landowner and conservative politician in Hertfordshire; his son was also called Abel, but was born some time after the dictionary containing the bookplate was published.

Woodhall Park shows the same crest on their Web site today, although it is now run by a business.