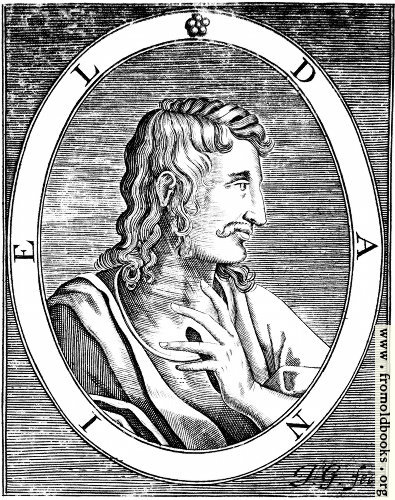 Wood-engraved portrait of Daniel taken from the picture of Daniel and Samuel, in the section entitled The Statesmen, following on from Moses.

DAniel entred into the Court by Captivity, stayed there by Mortification, made himself known by Prophecy, and there also rendred himself renowned by great Virtues. To comprehend this, is is necessary to know, that the little Kingdom of Judea was ordinarily very much exposed to the Armies of the Assyrians, which God had chosen to be the scourges and the instruments of the Justice that he exercised upon the sins of his people. King Nebuchadnezzar that reigned in the Monarchy six hundred years before the Nativity of our Lord, fell upon Palestine with a mighty Army, took and pillaged the City of Jerusalem, carried away King Jehojakim, with the richest Vessels of the Temple, and [an] abundance of prisoners of the most noted men, amongst which was Daniel, accompanied with other young Children of a good Parentage. (p. 765)