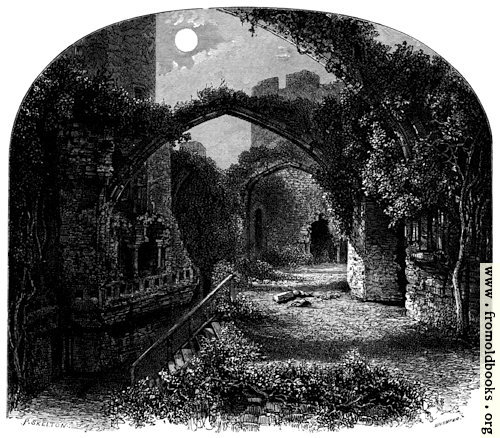 This engraving showing the romantic ruins of Rothenberg Castle (in Rothenberg, Odenwaldkreis, Hesse, Germany) by moonlight, with its ivy-colvered arches and crumbling towers, accompanied a poem (Rothernberg, by Emanual Geibel).

The picture will look very different depending on the brightness and contrast of your display and on the ambient light. I have brightened it somewhat.

The picture is signed J. Skelton for the artist and Whymper for the engraver; my attribution to Josiah Whymper rather than his son Edward is based on the entry for Skelton in Engen’s Dictionary of Victorian Wood Engravers, which mentions that the two artists sometimes worked together.

The picture is actually one of Conwy Castle in Wales; presumably the engraving was reused for this book as a plausible ruined castle.