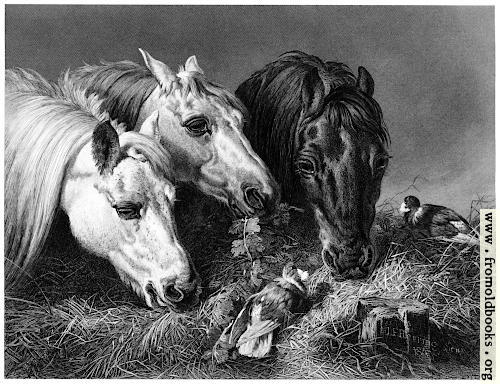 The various engravings which within the last few years have been made from Mr. Herring’s pictures, and the success that has followed their production have familiarised the public with his style —one that cannot fail to be popular in a country where such attention is paid to the breed of horses, and to the tenants of the farm yard. It is in subjects sketched chiefly from the latter that his pencil exhibits its greatest versatility, and his creative genius its highest powers; his straw-yard scenes are admirable compositions, and approach as nearly to nature as art can do; horses, cows, pigs, goats, poultry, pigeons, are depicted in their various phases in the most striking and attractive form, and with a richness of colouring which attest his close study of their habits, and his skill as an artist. Two of his finest ideal works are “Duncan’s Wild Horses” and “Pharaoh’s Chariot Horses;” the latter of these has been engraved, and both show the painter to possess qualities of mind which place him far above the mechanical copyist.

The “Scanty Meal” is one version of a story that the artist has before told in several different ways; a group of three horses heads, variously engaged, has long been a favourite theme with him, yet although we sometimes recognise the same animals, their occupations are so diversified as to dispel the idea that he has copied himself. The attitude assumed by the horse when feeding is exceedingly well rendered in each of the heads here engraved; there is a kind of dreamy listlessness about them that shows their relish for the dry fodder is not equal to its abundance, or in other words, that they are making a “frugal meal” in a land of plenty. The beautiful pigeons introduced into the picture make an agreeable variety in the scene, and afford the artist an opportunity of giving to his work some brilliant bits of colour. (p. 16)

The original painting, if it is well-reproduced on the John Frederick Herring Web site, seems to be of lower quality than the engraving by E. Hacker. On the other hand the Herring site doesn’t have the title of this painting, and instead call it Horses feeding with two ornamental pigeons at a manger, so maybe they have not taken such are over the reproductions.

Edward hacker, who made the engraving so well, specialized in animals.