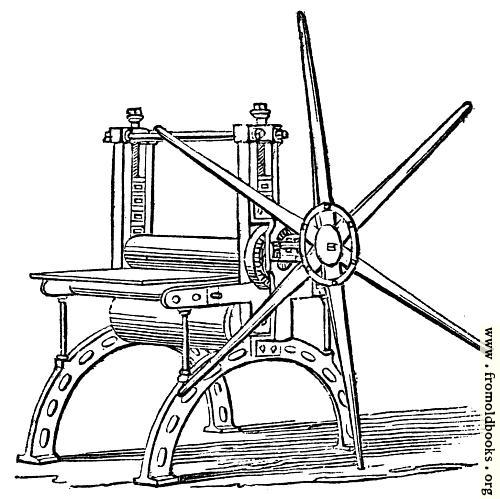 “The rolling-press, which is employed in nearly every species of copper-plate printing, is divided into two parts, the body and the carriage. The body consists of two wooden checks, placed perpendicularly on a stand or foot, which sustains the whole press. From the foot, likewise, rise four other perpendicular pieces, joined by cross of horizontal ones, which serve to sustain a smooth even plank or table, about four feet and a half long, two feet and a half broad, and an inch and a half thick. Into the cheeks go two wooden cylinders or rollers, about six inches in diameter, borne up at each end by the cheeks, whose ends, which are lessened to about two inches diameter, and called trunnions, turn in the cheeks about two pieces of wood in form of half moons, lined with polished iron to facilitate their motion. Lastly, to one of the trunnions of th eupper roller is fastened a cross, consisting of two levers, or pieces of wood, traversing each other, the arms of which cross serve instead of the bar or handle of the letter-press, by turning the upper roller, and, when the plank is between the two rollers, giving the same motion to the under one, by drawing the plank forward and backward. The ink usually employed is a composition made of the stones of peaches and apricots, the bones of sheep, and ivory, all well burnt, and called Frankfort Black, mixed with nut-oil that has been well boiled; the two being ground together on a marble slab, in the same manner as printers grind their colors. [...]” (p. 488, s.v. Press)